It's something that every member can do - it’s quick, it’s easy, it’s really valuable, and it involves enjoying the fantastic variety of beers available. Simply log in to WhatPub, familiarise yourself with the 5-point scoring system and away you go!

Beer scores are very important in deciding on nominations for the Good Beer Guide. CAMRA members can rate the beers they drink in pubs and clubs in WhatPub and half scores are possible:

Remember it is about the keeping and quality, not your personal flavour preferences. You are scoring the beer served in the pub, not the brewery. Download the picture below as a document -> CAMRA Beer Scoring Doc 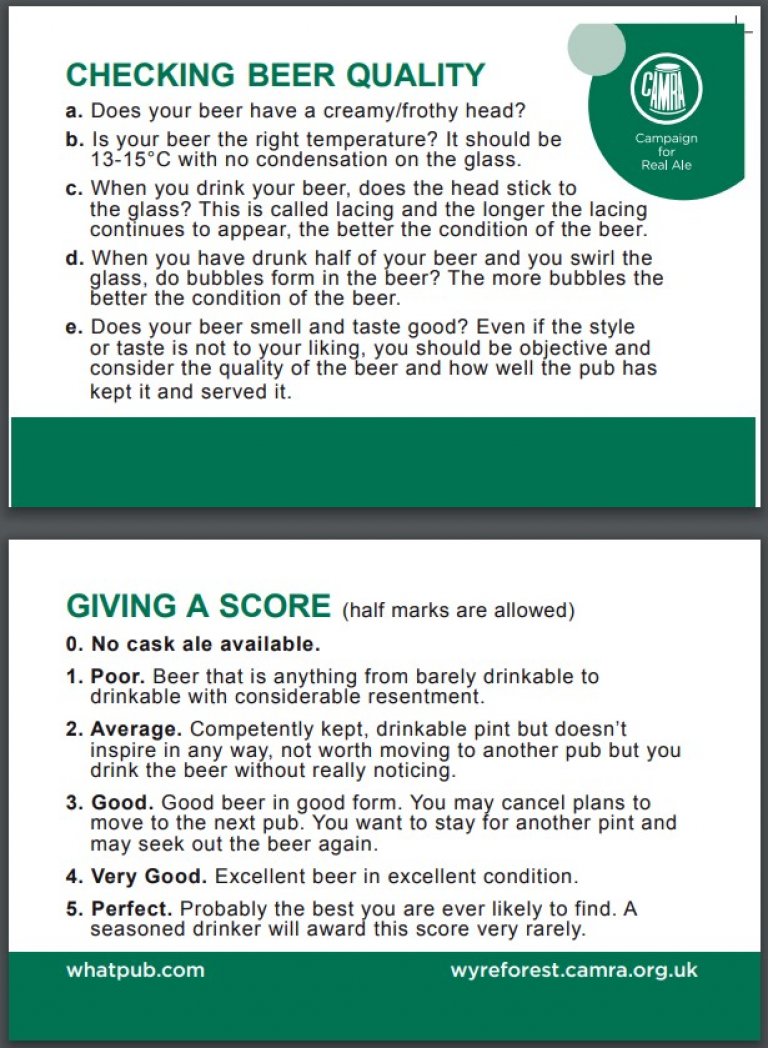 0 No cask ale available
Not stocked or run out.

0.5 Undrinkable
If the beer is undrinkable please politely tell the staff. Sometimes it might be reaching the end of the barrel, or the staff may have forgotten to pull the line through for the first pint of the day. Give them the benefit of the doubt and the chance to make amends. In a good pub they should be able to recognise that the beer should not have been served and offer to replace your pint. If it is replaced, the advice is to not to score the bad ale.

1 Poor
Beer that is anything from barely drinkable to drinkable with considerable resentment. Includes beer taken back as being poor and not taken off. As with a score of 0.5, if a beer is actually this bad it is really worth having a polite chat with the staff. If it is replaced, the advice is to not to score the poor ale.

2 Average
Competently kept, drinkable pint but doesn't inspire in any way, not worth moving to another pub but you drink the beer without really noticing. Below what is expected for the Good Beer Guide.

3 Good
Good beer in good form. You may cancel plans to move to the next pub. You want to stay for another pint and may seek out the beer again.

5 Perfect
Probably the best you are ever likely to find. A seasoned drinker will award this score very rarely.

In all of this it is always worth talking to the staff about beer quality, especially if the landlord or manager is around. Without direct feedback how can they improve? Complement them on a great pint, certainly – but if you think things aren’t up to scratch it's worth talking about that too. Sometimes bar staff will take it badly and be confrontational about your opinions, grin and bear it. Of course, if the landlord or landlady looks like he or she is in a bad mood, it might not be a good idea to start speaking with them when their beer isn’t good enough! Use your judgement and offer feedback when you feel it may help. Be prepared to accept that you may be wrong and learn from it. Some unfined and specialty beers may be intentionally cloudy, for example. Always be polite!

Wyre Forest CAMRA encourages its members to put in plenty of beer scores to identify where the very best beer is to be found for pubs in the Wyre Forest Branch area. The scores assist with deciding which pubs go into the Good Beer Guide at the annual meeting in February, so the competition runs from 1 February to 31 January each year.

The top half a dozen or more scorers are rewarded with bottles of beer, kindly donated by local breweries. 2016 and 2017 were very kindly sponsored by Bewdley Brewery, Enville Brewery and Kinver Brewery. There were twelve prize winners and lots of bottles of beer!

For pubs in the Wyre Forest Branch area you’ll collect ONE point for each beer scored on a visit, and TEN points for each additional pub or club. The top six scorers are rewarded with BEER at the February AGM.

Here’s where to find all the information you need:

Don't give a pint 5 just because it’s one you happen to like. Think: in your experience is this beer in front of me a really good example of this beer, or a pretty poor one? And don't give a pint 1 because it’s a stout and you happen to hate stouts.
If in doubt, don’t score, or maybe ask a friend what they think. Most people can tell the difference between a beer that just happens to have a flavour that "isn't for them" and a beer with actual defects.

Gradually, as you walk around pubs, you’ll accumulate scores and begin to develop your own method of making comparisons. It’s like riding a bike. Soon it becomes second nature.

Some people do find beer scoring confusing and are unsure as to the ‘correct way’ to record a beer score. But you don’t need to be particularly knowledgeable about every beer you might come across! The great thing about real ale is the diversity of tastes. Here are a few things to take note of when evaluating an ale:

1. Look:
Assess the colour, clarity and the foam of the pint. Golden ales should appear bright and clear while darker beers, such as stouts and porters, possess a richer colour and often a thick, creamy head. As a general rule of thumb it’s best to base your view on whether it looks appealing. If it’s got bits in it, or looks very flat (no head) it’s looking like a duffer. Some beers are meant to be cloudy such as wheat beers. Unfined beers can have a slight haze, but not always. In either case they should not be marked down on clarity and assessed on all the other attributes.

2. Smell:
Smell is an important part of the drinking experience. Take a short sniff of your drink to assess the aroma. If it’s immediately repulsive – smelling of vinegar or chemicals – then it’s a fair bet that the pint you have is poor.

3. Taste:
Take a sip and let it flow around your mouth before swallowing. Beers can reflect many taste sensations. The intensity of the flavours and the finish (the ‘aftertaste’) make up the whole taste. Give your taste buds a few seconds to register all the differing sensations. Has the publican kept the beer well enough to allow the flavour to come through fully?

4. Mouthfeel:
How does it ‘feel’ in the mouth? Most well-kept ales will have a light carbonation and feel ‘alive’. Well, they are! They should be served at cellar temperature – that means cool, not cold. Ales that are warm and/or as flat as old dishwater are definitely not good. ‘Flat’ beers can often indicate that the beer has hit the end of the barrel (imagine the dregs left in a bottle of cola that has been open a few hours) – this is a natural part of the cycle of the barrel’s lifespan and a good publican will be happy to check if you suspect an ale is at ‘bottom’ and replace it with a fresh pint from elsewhere.

With thousands of ales to choose from, everyone has their own personal favourites and things that they don't like, so please try to give an honest account of how well-kept a particular beer is. If you aren't sure then try to do your scoring based on beers that you know that you normally like when they are in good condition.

A handy guide to beer scoring can be downloaded here> How to score beer.

Wyre Forest CAMRA uses beer scores to identify where the best beer is served, and is being served consistently very well. The pubs serving the consistently highest quality beers are considered for inclusion in the Good Beer Guide so that a visitor to the area can find a nearby pub serving consistently excellent beer.

The Good Beer Guide is published in September each year. Nominations for the Guide are submitted by the Branch in early March.

In the Wyre Forest Branch area, scores submitted from 1 February to 31 January each year through WhatPub by many CAMRA members are used, both from the local branch and visiting members. Typically over 3,500 scores are received from around 130 individual members, which gives high confidence in identifying the establishments consistently serving the very best kept and very well presented beers.

The quality of presentation of beers locally has risen noticeably over the past few years. Competition for the 14 allocated places in the Guide locally is increasingly intense. The typical average score threshold for entry into the Guide is around 3.5.